A few years ago now I traveled to Malaysia to take part in the first ‘Small Universe’ taught by my Qigong teacher. Well, it was certainly the first time he’d taught these advanced Qigong exercises publicly in a l-o-n-g time. Apart from learning various approaches to attaining the breakthrough of the small universe, Sifu also taught us the techniques of the Big Universal Flow. Let’s take a quick look at these two advanced Qigong exercises now.

Whilst I know of people who have connected these 2 important meridians without any specific qigong exercises, but as a result of their normal qigong practice, here is an overview of some of the steps taken to deliberately attain the break through of the small universe. This is an overview and not an instructional post, so I won’t explain these steps in great detail.

In the beginning we were advised to use steps, to ‘get the system going’ and then after some months of practice to go straight to the mind level of this qigong exercise. Those steps included:

This was the pre cursor to then following the ‘forceful‘ or the ‘gentle‘ small universe.

The ‘gentle’ small universe, whilst appearing easier, was I found harder to get a ‘grip’ on. As it consist mainly of what externally appears as Dan Tien Breathing combined with visualization. Though once I got the hang of it I preferred it to the forceful small universe.

The aim of this qigong exercise is to attain continuous energy flow through the 12 ‘primary’ meridians of the body. These 12 meridians (energy streams) are called primary because they pass through the internal organs, from which they get their names. It is said that a qigong student who attains the big universe will live for 100 years. 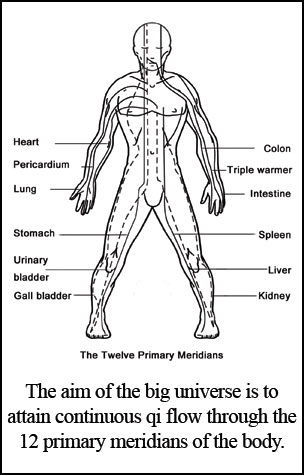 We were shown two ‘types’ of this qigong exercise. The first was called the ‘medical’ big universe and to an outside observer it appears that the practitioner is stood in ‘cosmos stance’ performing reverse breathing. But inside the practitioner there is a whole lot more happening. By using the mind the practitioner is directing the flow of qi/energy along a very specific route through the body, for a number of repetitions.

The other big universe qigong exercise we were shown was the spiritual big universe. Here are the exact instructions I wrote in my note book:

As you can see from the instructions above this is a qigong exercise that can only be learned directly from a teacher who has this skill. In fact it is my opinion that attempting to learn the small or the big universe from a book or video is a waste of time.