Today I’d like to take a quick look at a group of chi kung/qigong exercises, familiar with most ‘internal’ martial artists called Zhan Zhuang. This type of qigong exercises are also known as Stance Training and the two most popular stances are Horse Riding and 3 Circles.

Virtually every ‘internal’ school of martial arts has it’s own set of Zhan Zhuang qigong exercises. But the one thing they all have in common is that the chosen stance is held for anywhere between 30 seconds and 1 hour. Apart from developing strong stances these type of qigong exercises give the benefit of internal force.

Think of internal force as ‘energy+’, it is also said that a martial arts practitioner with strong internal force can ‘channel’ some of that force into an opponent on contact to cause serious damage. Personally I have never been on the receiving end of internal force used like this, but I have seen its effects whilst watching others sparring.

Whilst there are many different qigong exercises that come under the umbrella of Zhan Zhuang they all have one thing in common. They have been stripped down to just 1 pattern. And this is why I say you are crazy if you think you can learn Zhan Zhuang qigong exercises from a book or video. 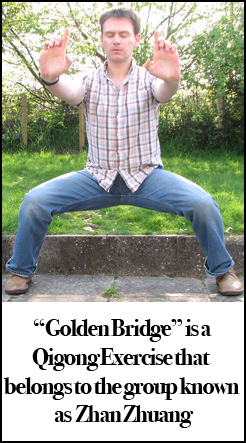 It’s just my opinion, but I feel that these qigong exercises must be learned directly from a suitably qualified instructor. Why do I feel so strongly? Well, unlike qigong exercises from the Ba Duan Jin or 18 Lohan Hands, zhan zhuang only has 1 pattern and if you get this pattern wrong – which you probably will – then you have got the whole thing wrong.

Now if you’re lucky, you’ll just end up wasting your time, but if you’re not you can cause yourself more harm than good with this type of qigong exercises.

Remember – qigong exercises are a composite of form, energy and mind. Zhan Zhuang stances are usually quite demanding physically, but it is imperative the body, breathing and mind are relaxed. So if you’ve got the stance wrong, your bodies aching and you insist on ‘feeling the burn’ then your breathing will be effected and your mind will be all over the place – this is very bad, okay!

Even practicing zhan zhuang under the guidance of a master or instructor it is still easy to make mistakes.  One I know from personal experience is ‘over training’ and the first tell tale sign of this is discomfort in the chest.  If you experience this, stop immediately, have a qi flow and speak with your teacher.

Zhan Zhuang is not an exercise in endurance like many students believe, it is actually an exercise in relaxation and the 3 ‘golden’ rules of zhan zhuang qigong exercises is 1) Relax, 2) Relax, 3) Relax.